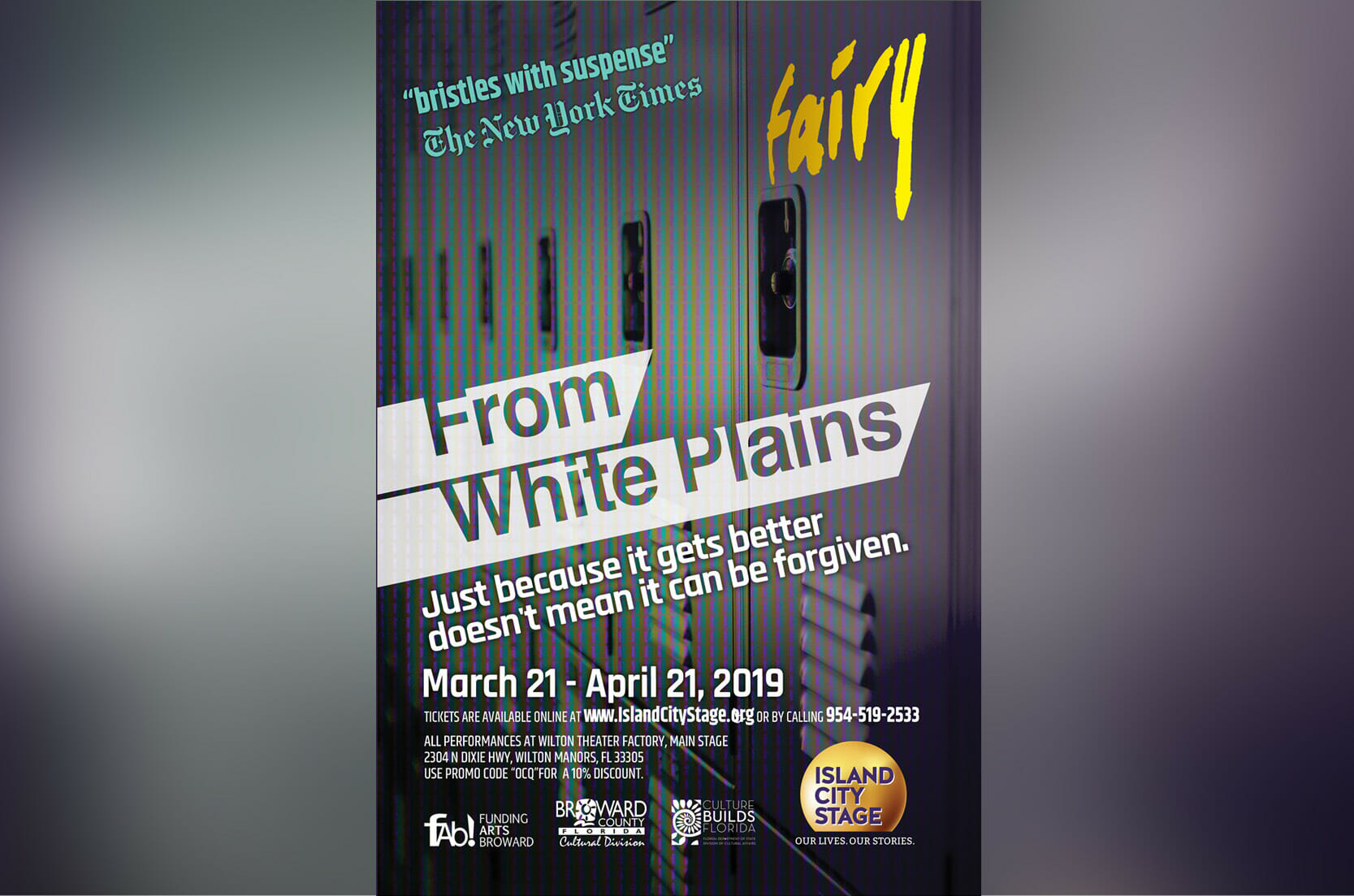 Playwright Michael Perlman has written a play, From White Plains, about the longstanding reverberations of teenage bullying and the manifestation of it in the viral age. I discussed the play with Perlman, as well as his creative process, before it’s upcoming run at Island City Stage.

MIKE JEKNAVORIAN: How many plays have your written so far?

MJ: Are you a formally trained writer or are you self-taught?

MP: I’ve taken classes in the past, but my writing process really comes from the rehearsal process. I’m constantly trying things and seeing what works and what doesn’t, and rewriting every moment, until it works or until opening night arrives. My studies as an actor and director certainly influence my writing.

MJ: What was the impetus for the story in From White Plains?

MP: I was really interested in exploring an issue where the audience that was coming would probably share the same point of view, that gay bullying is bad, and then they find the complications and the nuances of the human experience. At the time, I’d been reading so much about multiple young people who were committing suicide as they struggled with their sexuality, which is an issue that’s even more rampant and pronounced in the trans community, and it was at the height of the “It Gets Better” campaign. I found myself asking a lot of questions, and really thinking about what it means to grow up. How do we both bring our past with us, and let go of the past when it’s holding on to us? This is the play that developed.

MJ: Why is the play set in White Plains, New York, and not some other town?

MP: In addition to White Plains being the type of town I saw these young men as hailing from, I also like the play on the name. What happens when you’re in a town that’s plain and white, but you’re not so “plain” or not so “white?” It also became the name of Dennis’ [the main protagonist] movie for that reason, and so the title takes on multiple meanings.

MJ: Among other things, the play appears to address accountability. Do you think that people can make amends for their actions?

MJ: Did you write the Rice character, the bully, as in the closet?

MP: No. I personally take his sexuality at face value.

MJ: The tagline for the play says, “Just because it gets better doesn’t mean it can be forgiven.” What’s beyond forgiveness to you?

MP: I quite like this tagline, although it’s not the tagline we used in the original production. In the original production, we used, “Just because it gets better doesn’t mean it didn’t happen.” What does it mean to move forward when we’ve been traumatized? I think there are a lot of questions now about what can or can’t be forgiven, and who exactly the judge of that is in any given situation. I don’t know that there are any clear cut answers. I certainly don’t have any.

MJ: Considering the adage, “Time heals wounds,” is the play making a statement, or is the point of it to stimulate thought on this subject?

MP: I think the play is asking questions, which hopefully stimulates conversation. I think in this day and age, simply asking questions about the nature and limits of forgiveness can be quite powerful, and I can’t pretend that the answers to those questions are easy.

MJ: Where did the play run in New York?

MP: We did a workshop production at Teatro Del Tea in June of 2012, and then a run at Signature Theater in January and February of 2013.

MJ: Which of those two runs was the most special to you?

MP: The original productions was of course one of the most special experiences of my life. I was working with collaborators in such a new and exciting way, and we really were figuring out what the play was each day in rehearsal. I would go home and rewrite 20 to 30 pages overnight, and then we’d come in and make those pages come to life. It was such an accelerated and energizing process, and I’m forever grateful to that original team for their hands in developing a play that has gone on to have such a long life.

MJ: What was the most emotional response that you’ve encountered to the play?

MP: What’s been really special about the journey with this play is that people often tell me their own stories, which is much higher praise than I could ask for, rather than praise the piece. I’ve had people open up about their own experiences being bullied, or as bullies themselves, realizations they had about their own anger or their own complicity while watching the play, and ways in which they saw their own struggles in the play. It’s always a powerful experience for me to hear other people’s life experiences, and I’m profoundly grateful that this play opens people up enough to do that.

MJ: Who’s your dream cast for the play?

MJ: What’s next on the horizon for you?

MP: I’m currently an associate producer at the Guthrie Theater, so I’m up in Minneapolis helping to bring more stories to the stage. While there, I’m continuing to pursue work as a director and writer, and I’m happily enjoying when the plays that I’ve written continue to be performed around the country and around the world.

MJ: You’ll attend the premiere. What will you do with your down time when you’re here?

MP: A good friend of mine has to be down in South Florida for work, and it happened to be near my birthday and while this production was happening. So we decided to make a trip of it! I’m very excited to see the production and to share that experience with an audience again. Mostly I’ll be enjoying getting out of the cold winter of Minnesota.