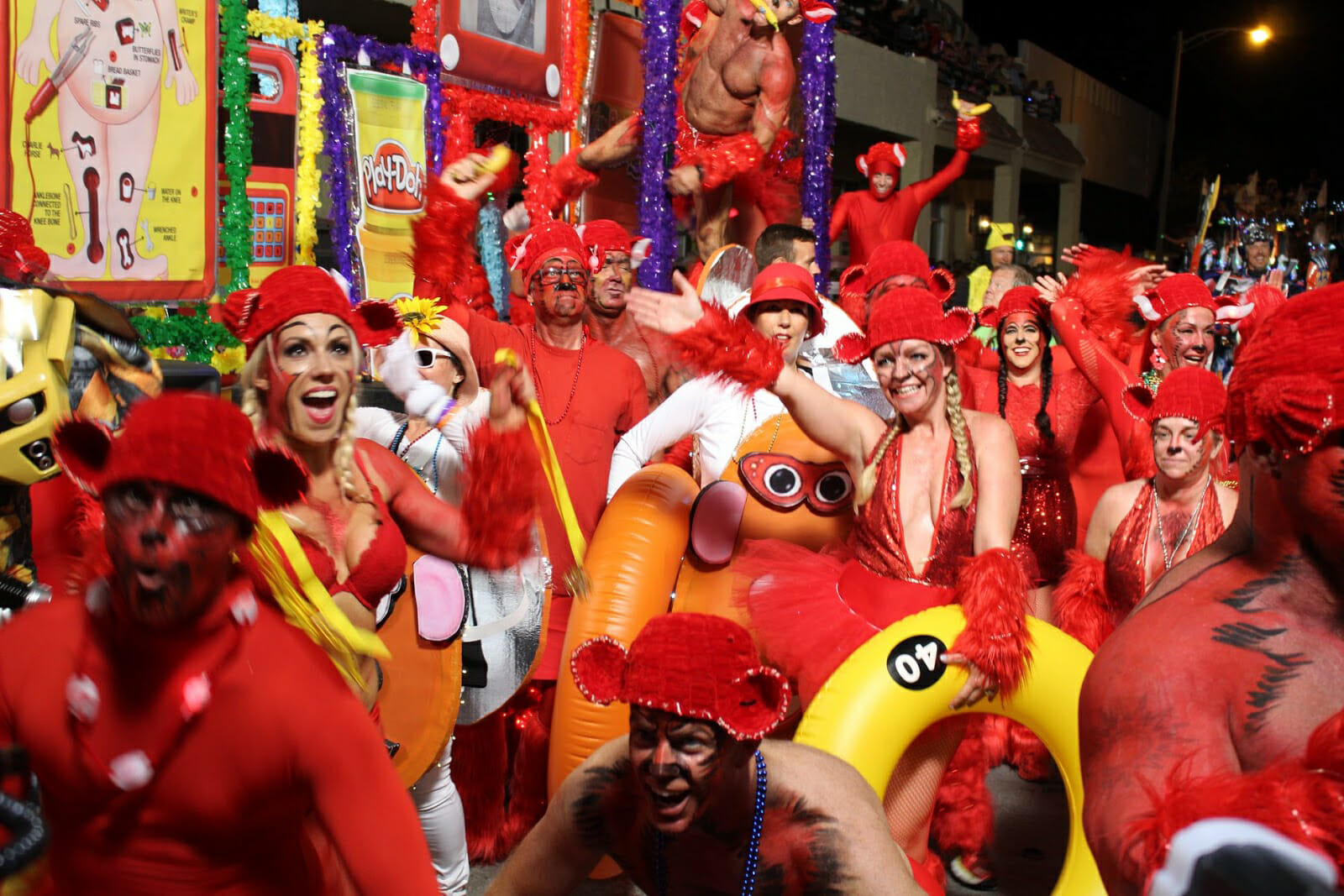 After ten days of outlandish behavior and extravagant costumes here are our selections for the top ten events of Fantasy Fest 2018.

This is the big one. Even the pre-parade smash-up is a sight of beauty. Floats are scattered around Truman Waterfront Park like the dropped playthings of gods. Competing music blasts from the varying groups. It’s not long before you’re onboard your decked out vessel and pulling onto the parade route. Spectating is fabulous, but being in the parade is life-changing. For two hours all eyes are on you – judges, international media, thousands of visitors. All are vying to have your stash of beads thrown their way. Most secretly wish they could be a part of the parade. It’s the ultimate Fantasy Fest party as you slowly wind your way down Whitehead and Duval Streets, stopping at judging stations to compete for various prizes. With every float boasting its own music and theatrics, it’s one of the most unforgettable sights in Key West. This marquee event maintains its position as the crowning jewel of the week-long fantasy. If you are lucky enough to be invited to join a float, do it. You’ll never be the same. 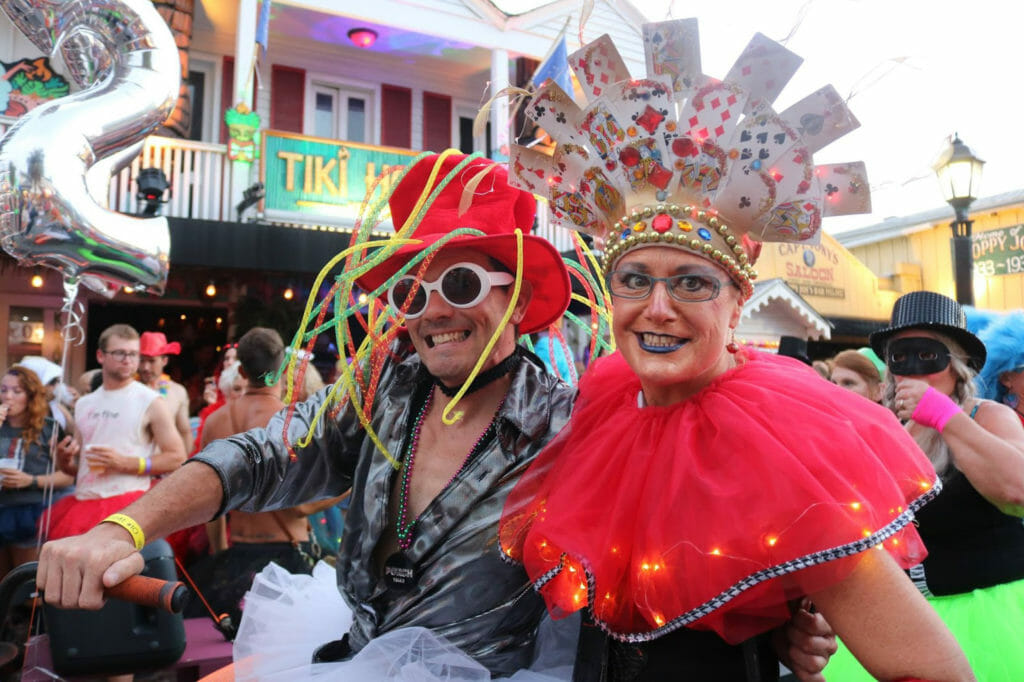 Holy tulle! Another product of Marky Pierson’s team, hosted at this triple tiered venue, any fears of a change of location dissipated. Electric. Transformative. Pure energy. The initial TuTu bar crawl and march downtown were treats in themselves. Walking through the tulle adorned entrance of the General Horseplay Complex was sensory overload. The multileveled complex was akin to Alice going down the rabbit hole – but in a tutu! Each room offered a new DJ, new costumed patrons, and a frenzy of energy on the dance floor. Patrons spilled out into the courtyard and surrounding main streets where sporadic block parties seemed to pop-up. The crowd never died and kept growing right till the close at 4:00AM. All pretenses of leaving early to check out other events evaporated. This wasn’t just the big tutu party. This was the indoor-outdoor party of the festival and possibly the year. 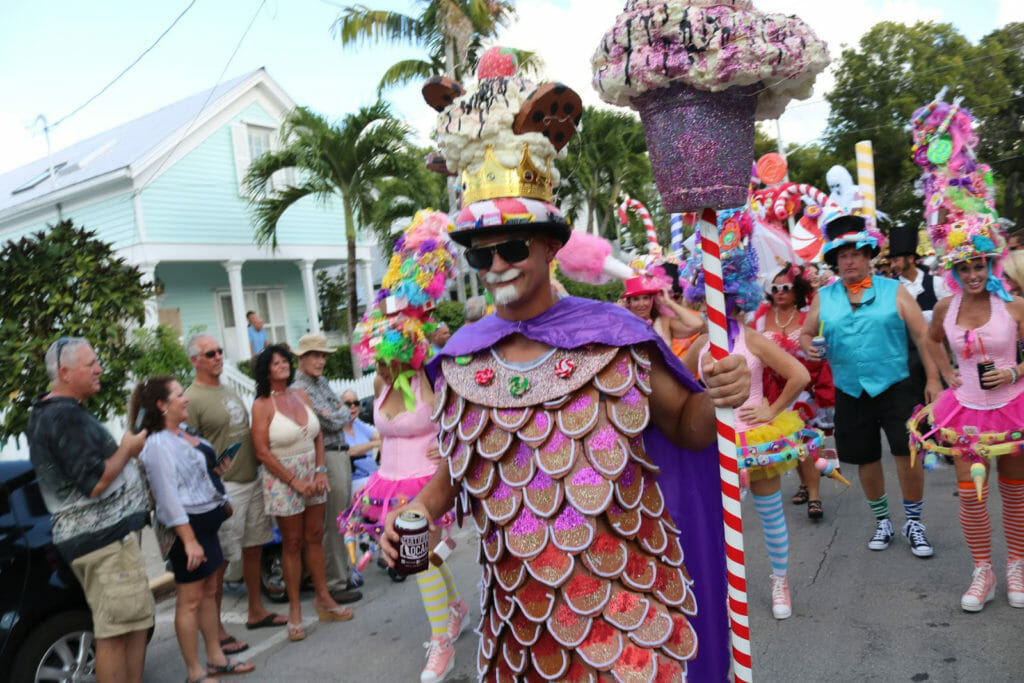 No one is left out of Key West’s festivities, not even the dead. Beginning at the Key West Cemetery this local’s parade has evolved into a costume dry-run for the following day’s main parade. With speakers atop tricycles this giant moving street party is a terrific more laid back alternative to being in the Bud Light Fantasy Fest Parade. Guesthouses and champion neighbors provide revelers with drinks and goodies along the way as a thank you for the display. Since this passes through residential areas, the costumes tend to cover more tidbits than other events, paving the way for an explosion of artistic prowess. Revelers are free to exit or join the march at any point making this one of the easiest events to both watch and feature in. 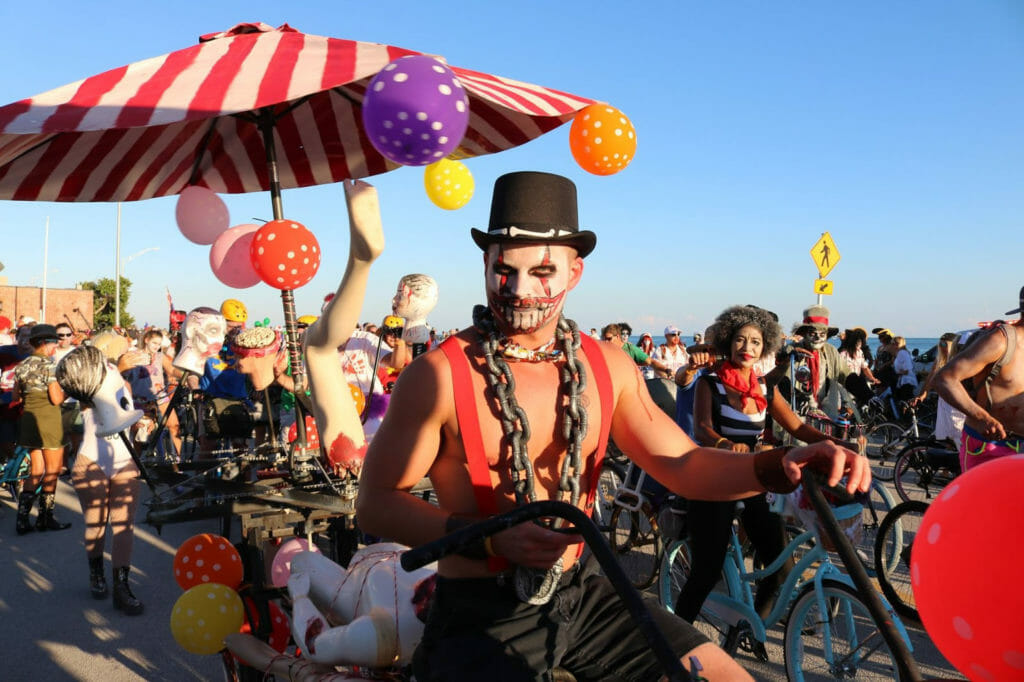 Zombie Wednesday Adams. Zombie Minions. Zombie queens of the regal and gay varieties. This family-friendly event begins at the panoramic oceanside Fort East Martello where there are body painters, drinks, and live music. The route snakes its way across the island toward the viewing parties of downtown. It is both absurd and beautiful to see thousands of zombified riders gliding as one into the sunset. Unlike the marquee Bud Light Parade, this event is almost entirely populated by locals and much more welcoming of children. Tricycles, bikes, skateboards, and moving installations are all permitted. Hot tip: the smaller your transportation device the better you can maneuver the hordes of undead.

Strictly kinky attire gets you into this strictly kinky experience. The perimeter is blocked off from street view encouraging participants to get as naughty or stripped down as they like. The multileveled facility provided a maze of titillating rooms with lots of juicy surprises. Masked and unmasked you might find yourself running into school teachers, justices, artists, and captains of industry all submitting to their inner kink. This is a hotly attended event so expect lines and standing room only.

Walk or dash through this downtown route dressed as your favorite hero or villain. The roughly three mile course ensures that it’s gentle enough for any hungover revelers. The welcoming of children to this event makes this family-friendly and all-inclusive. The ThemeRuns crew has years of experience putting on some of the zaniest runs in the Keys. This jovial affair is one of the few truly atypical party events all week, physical activity beyond scrolling through Grindr. Sexy Doctor Strange says yes, please!

All sections open to both men and women during Fantasy Fest. Bourbon Street Pub, nevertheless, continues to anchor itself as a primary watering hole for the gay community. Completely blacked out from public view, the event aimed to encourage risque shenanigans. The outdoor complex complete with pool, jacuzzi, go-go dancers, and secluded decks provides a whirlwind of visual and audible scandals with adult performers roaming the various stages for steamy shows and crowd interaction. Even this wallflower writer was approached with multiple propositions that will not be repeated here, opportunities abound for everyone. 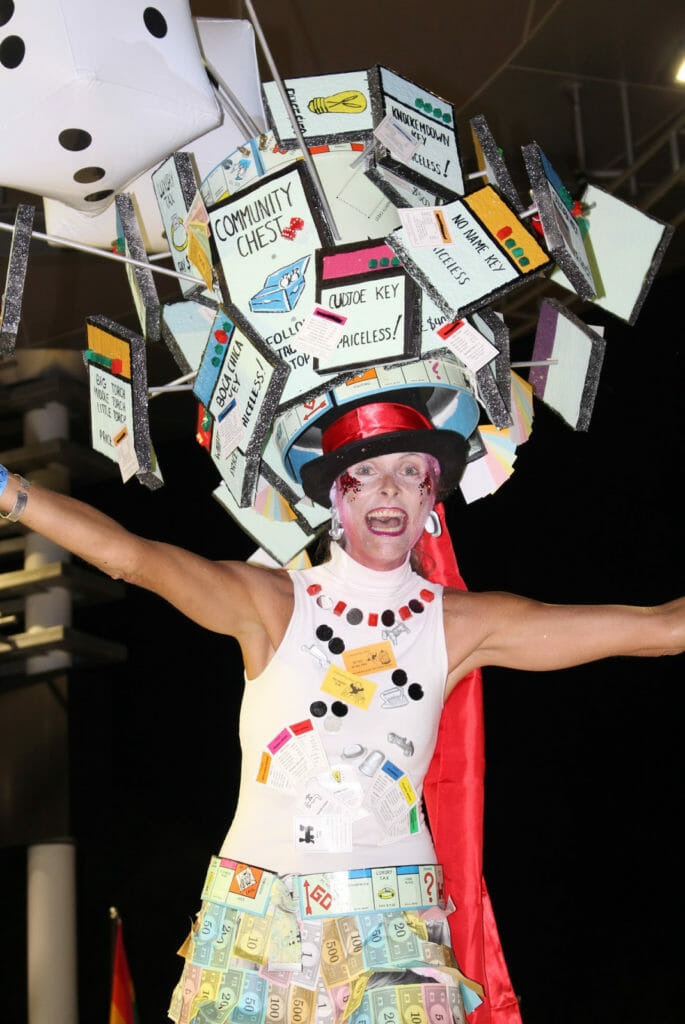 There’s a certain standard one gets accustomed to for events thrown Thrown by the Key West Business Guild, the Annual Headdress Ball goes off the Duval track for a sit-down dinner, now at the newly constructed Key West Amphitheater, that sees local artists and designers compete in some of the biggest, funniest, and most outrageous headwear. The contestant entries are interspersed among skits and musical performances. The venue maintains an open air atmosphere with ample space to stroll across the sweeping lawns and mingle with other guests. If the hustle and risque displays of most Fantasy Fest events are not for you, but you still enjoy slipping into fancy wear, then this will definitely be more along your lines. 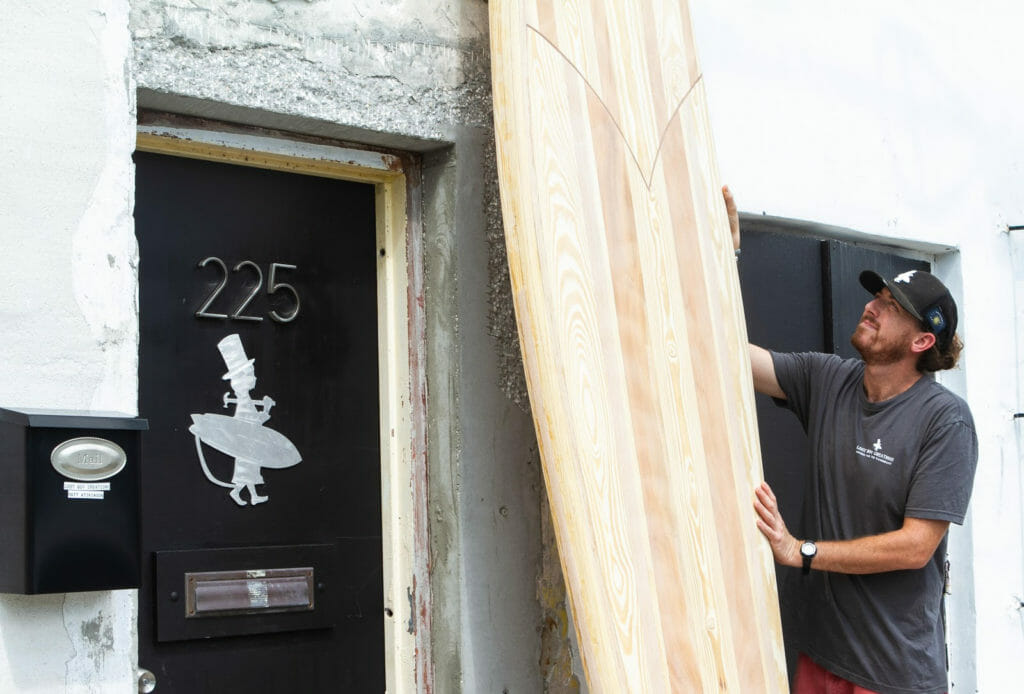 Blink and you might have missed this quaint gathering. Two blocks into Bahama Village and in the thick of Goombay Festival is the result of craftsman and popular local bartender Matt Atkinson’s years of woodwork and design, Lost Boy Creations. This one-off grand opening was the quintessential hidden-gem: a good vibe oasis in the middle of pandemonium. Featuring live painting demos, mellow guitar riffs, a Key West potluck, and all your favorite bartenders, several attendees audibly gasped upon stepping into the hidden open-air outdoor space that reminded them of old school Key West. Any future events here will be one of the best ways to mingle among locals early on in the festival.
225 Petronia Street | Free | www.LostBoyCreations.com 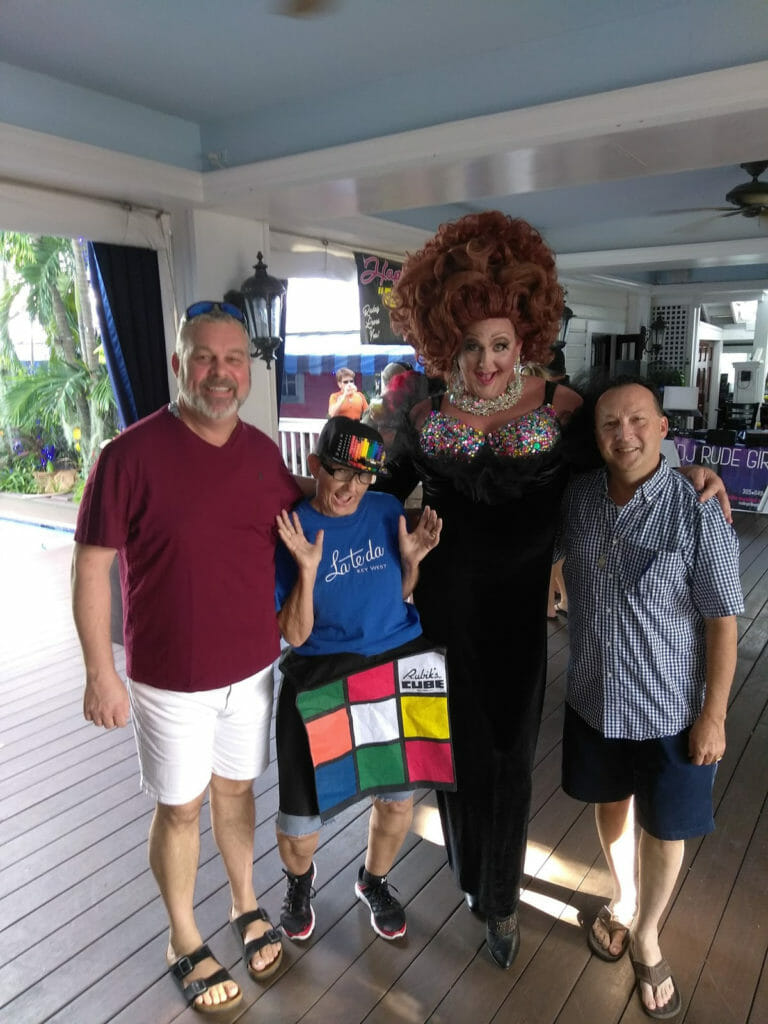 Key West’s weekly Tea Dance at the chic La Te Da’s quintuples in attendance for this final hurrah of Fantasy Fest. Featuring music from the decades that really matter, performances from local queens, and a poolside dance floor bursting with energy, it’s a wonderful send-off reminiscent of the Tea Dances up north. While you’re waiting in the incredibly long bar lines, order what you might need for the whole night in one go, be sure to scope out the oodles of well-groomed fabulously single gentlemen. This feels like the right event to snag a significant other.

Kevin Assam is a curiously funny young writer with a wicked sweet tooth. He is working on the first in a series of books based on his experiences in Key West.

One of The Great Believers