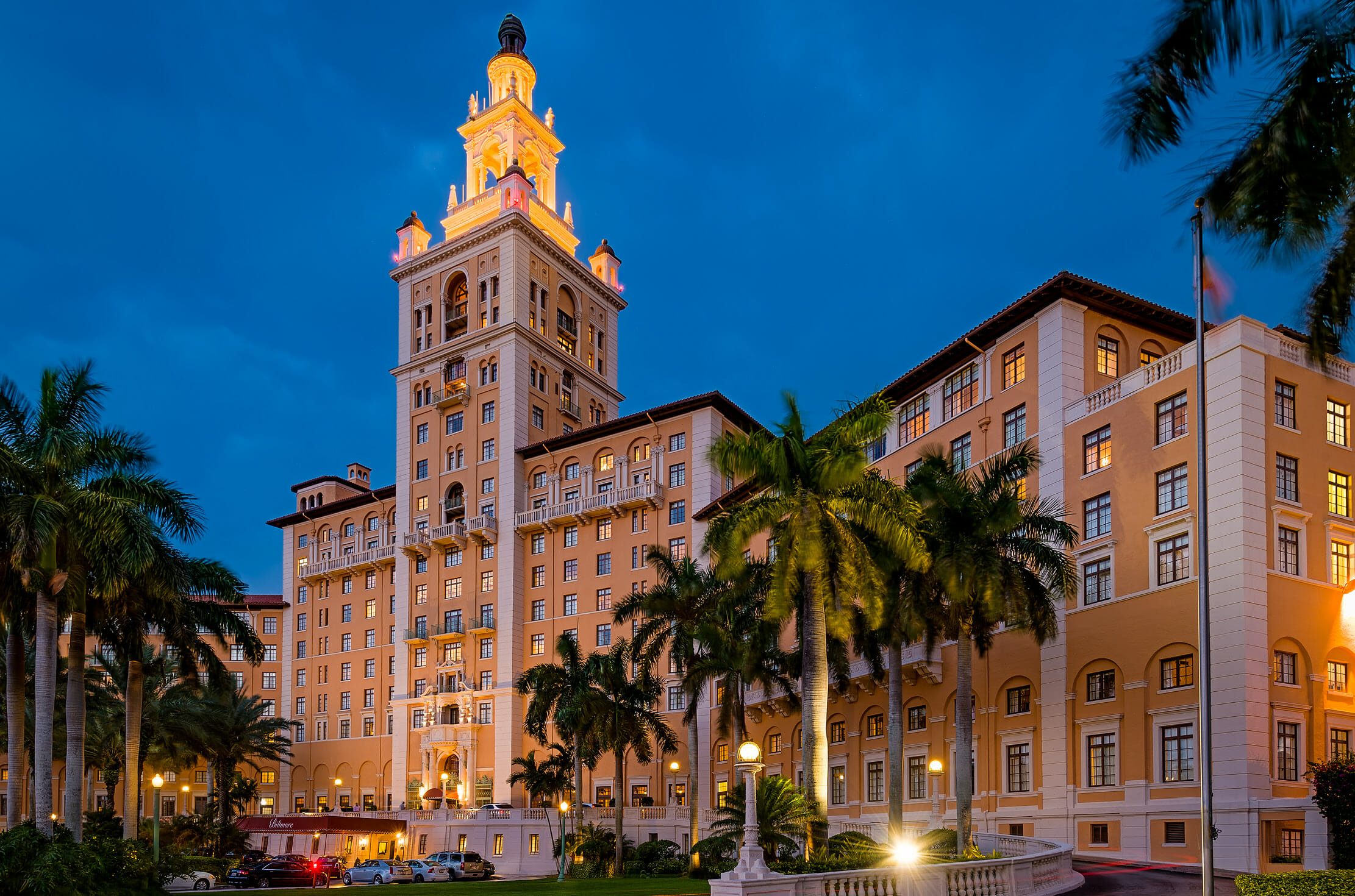 South Florida may be full of beautiful beaches and plenty of sunshine, but it does come with its fair share of oddities and curiosities. Since October is upon us and we are in the spirit of Halloween, several paranormal fanatics and thrill seekers will be on the hunt for notorious haunted locations. South Florida has plenty. From haunted hotels to demon roads, it’s a supernatural paradise that will send shivers down your spine. Listed below are some of South Florida’s most popular, and creepiest haunted landmarks. Take a look, and maybe even pay a visit to some of them – if you dare. The unknown awaits.

The Biltmore Hotel is one of the most iconic and haunted landmarks in South Florida. Built in 1926, this sprawling hotel hosted royalty, gangsters, A-list celebrities, and served as a military hospital during World War II. Because numerous soldiers died at the hotel, it is said that their spirits never left. Curious high school students after the war reported seeing apparitions in military uniforms. However, the bulk of paranormal activity occurs on the thirteenth floor. Guests have witnessed lights flickering on and off and doors opening and closing by themselves. The spirit on occasion has also been known to hold doors open for servers and stop the elevator on wrong floors. Hotel staff believe the spirit who resides on this floor is legendary outlaw and gangster Thomas “Fatty” Walsh. Walsh was shot and killed at the Biltmore in a gambling dispute on the thirteenth floor.

An area of South Florida that is popular for retired folks, Delray Beach is home to the Blue Anchor Pub. A popular London bar that opened in 1864, it was transplanted to the U.S. and re-assembled with its original doors and stained-glass windows at its current location in 1996. However, the building wasn’t the only thing that came to Florida. The Blue Anchor is said to be haunted by a woman named Bertha Starkey who was murdered by her husband when he blew up in a jealous rage. Visitors have reported hearing footsteps across the ceiling at night, and paranormal activity increases around the anniversary of her death. So, the next time you order a pint of beer along with your bangers and mash, just think, you may not be alone.

Amidst the hustle and bustle of downtown Miami’s Edgewater and Omni neighborhood, take a stroll through the city’s oldest cemetery. You may never know what is lurking behind the tombstones and mausoleums. Home to many well-known names, including Julia Tuttle, the “Mother of Miami,” the Burdine Family, founders of the Burdines department store, and Carrie Miller, the woman who was buried in her bed instead of a casket and encased in cement, this cemetery is split into three different sections: Jews, blacks, and military personnel. The City of Miami Cemetery is the final resting place for 66 confederate soldiers and 27 union soldiers. It is said that these Civil War soldiers are the ones responsible for spooking visitors.

Constructed with art deco-style architecture in the 1930s, the Colony Theatre was one of Paramount Pictures’ premier chain theatres. It has hosted several events, including films, comedy shows, dance programs, and operas. The theatre is also host to numerous ghosts. Haunted activity reported at this venue includes apparitions of a woman wearing 1930s clothing and a white poodle roaming through the theatre. The stories behind these spirits are a mystery, but they have not been known to cause harm to anyone. People have also heard ghostly voices and footsteps in the backstage area, theatre lobby, and dressing rooms.

Deering Estate is a hotspot of paranormal activity. An environmental, archaeological, and historical preserve in Palmetto Bay, no one has lived in the Deering Estate since the 1980s. The estate’s history stretches back 50,000 years thanks to the variety of prehistoric burial mounds and fossils that have been uncovered over the years. One of the most common reports of paranormal activity is that the spirits will whisper in your ear. Paranormal groups and ghost hunters have collected evidence of disembodied voices, EVPs, phantom footsteps, unexplained shadows, and full on apparitions. It has been reported that a psychic once heard a woman begging for help for a drowning boy.

Due to its large number of resident psychics and spiritualists, Cassadaga has been dubbed as the “Psychic Capital of the World.” Several places through Cassadaga are rumored to be haunted, but many witnesses have reported paranormal activity within Lake Helen Cassadaga Cemetery, particularly near a site called the Devil’s Chair. Gravestones within this cemetery date back to the 1800s, and folks say they have seen shadowy figures lurk around at night. The Devil’s Chair is said to have been built for an elderly visitor to use while paying respects to his deceased wife, but stories of much darker happenings have been told. Is Satan himself residing within this cemetery? We may never know.

When you think about it, more and more college campuses across the countries are becoming known to be haunted. However, that should really be no surprise. The college years are more often than not filled with broken hearts, nervous breakdowns, and shattered dreams – the perfect recipe for a haunting. At Florida Atlantic University, the Humanities building is home to a female spirit who students and security staff have reported seeing crying and sometimes slamming doors on the third floor. Story is, she was a theatre major who did not reach her full potential. Landing minor roles in college productions, she was underachieving. Now, she lurks around the building and takes pleasure in suddenly appearing and disappearing. Since she could not capture the spotlight alive, maybe she will now in death.

A visit to this historic cemetery may offer you more than you bargained for. There are more than 100,000 people buried within this cemetery, and it has been reported that many of them are still lingering. One of the more well-known spirits is that of a Bahamian woman who is considered to be a guardian of the graveyard. She will approach you if she feels you are being disrespectful or too loud. So, make sure to be on your best behavior. Visitors have also reported seeing a ghost that is so angry that it has been known to attack those who visit at night. Other eerie encounters include disembodied voices, shadow figures, strange orbs, and the laughter of children.

Built in 1901 as a trading post and converted into a residence in 1906, this was the home of Fort Lauderdale pioneers Frank and Ivy Stranahan. Today, it operates as a historic house museum and is the oldest surviving structure in Broward County. It was placed on the National Register of Historic Places in 1974. However, it is rumored that Frank’s spirit never left the property after he died. Frank was a businessman who fell on hard times during the Great Depression. He drowned himself in the nearby river. Ivy died much later in 1971 in an upstairs bedroom, and her ghost is said to still reside there as well – along with the ghosts of her father, brother, sister, and a Native American servant girl. Visitors to the museum have witnessed apparitions and other strange occurrences, including disembodied voices and objects moving on their own. Sometimes, there will be an imprint of a body lying on a bed as if someone is truly there.

Not only is Villa Paula one of the most haunted places in South Florida, but it also has a reputation for being one of the most beautiful and historic buildings within the area. Built in 1925, this 10-bedroom manse served as the first Cuban Consulate in Miami. It also served as the main residence for Consul Domingo Milord and his wife, Paula. Unfortunately, around six years after moving in, Paula passed away following complications of a leg amputation. Soon after, paranormal activity started to occur. There have been reports of visitors hearing phantom footsteps, seeing doors and windows open and close by themselves, and smelling Cuban coffee and roses wafting through the air. Witnesses have also reported seeing a full apparition of a one-legged woman in a full-length gown. Villa Paula is now an art gallery exhibiting works by renowned Cuban artists, in addition to Picasso and Renoir.