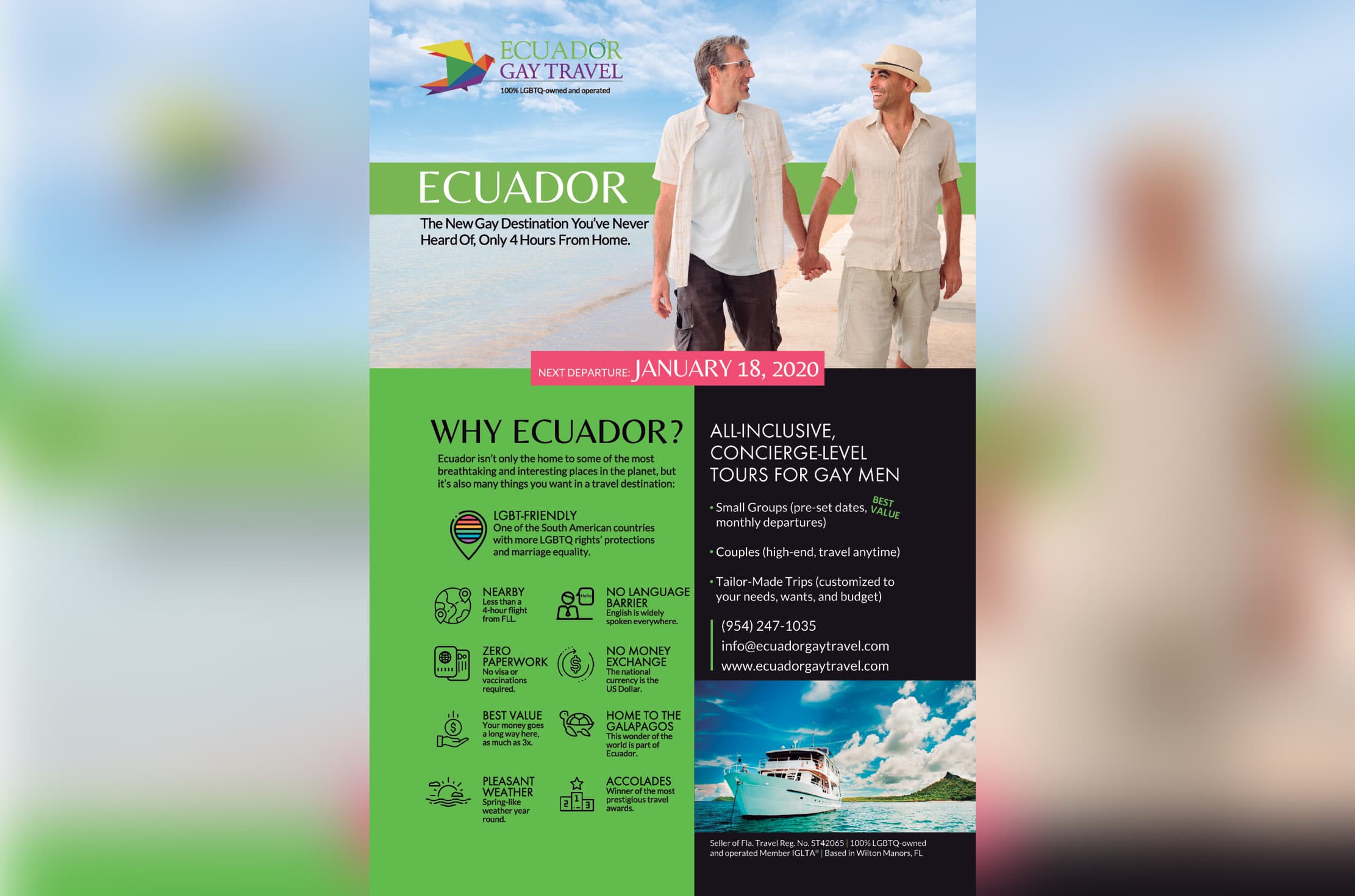 A Hidden Gem for Gay Travelers

Time to add this breathtaking, safe, and uncomplicated destination to your travel bucket list!

Ecuador has been for many years one of the world’s most amazing destinations for travelers from all over the globe. It’s beauty, history, culture and the Galapagos Islands have made Ecuador one of the top destinations in the world. However, it remains unknown or on the back burner for most gay men, who feel safer with more traditional travel choices like gay cruises or events in different cities of the United States and Europe. Juan Maldonado, a dual-citizen of the U.S. and Ecuador, and a proud resident of Wilton Manors (Florida’s “gay mecca”), is determined to change this by promoting his home country as a fabulous destination for gay travelers that is both safe and uncomplicated.

Even though most of Latin America is traditionally conservative, Ecuador is one of only five countries in the world whose constitution provides citizens equal rights regardless of their sexual orientation or gender identity since 1998. Ecuador is also one of the few countries in the world to have banned conversion therapy. Under the 2016 Gender Identity Law, transgender people may change their legal gender solely based on self-determination, without undergoing surgery. As of July 2019, same-sex marriage is legal.

Aside from its LGBTQ rights record, Ecuador is simply an uncomplicated choice for North American gay travelers for several reasons. For example, its capital, Quito, is less than 4 hours away from Florida (which is about the same as flying to Denver). No visa or vaccinations are required for Americans and Canadians, and most Ecuadorians speak English. The official currency is the U.S. Dollar, so there’s no need to worry about exchanging money or losing value. In fact, dollars go a long way in Ecuador, as much as 3 times, due to the very low costs of labor, food, gas, transportation, rent, etc.

For these reasons and the fantastic year-round weather in Quito and other cities on the Andes Mountains, Ecuador has been recognized for many years as a top destination for retirement and boasts a growing number of gay expats from North America. For the seventh year in a row, Quito has won the title of “Leader Destination in South America” in the World Travel Awards (the Oscars of tourism), and the Galapagos have been for decades one of the most coveted natural destinations in the world. Prestigious publications like Lonely Planet, Condé Nast, Forbes, and websites like TripAdvisor, among many others, have recognized Ecuador’s unmatched beauty and potential.

Ecuador Gay Travel, LLC is the only all-gay tour operator with offices in both Ft. Lauderdale and Ecuador. The company offers premium travel experiences to and from Quito, the Galapagos Islands and Fort Lauderdale, with all-inclusive tours and itineraries designed for and by gay men. Its bi-national team has a combined experience of 35 years in the tourism industry in Ecuador and Florida.

THE POLAR EXPRESS™ Experience on Brightline