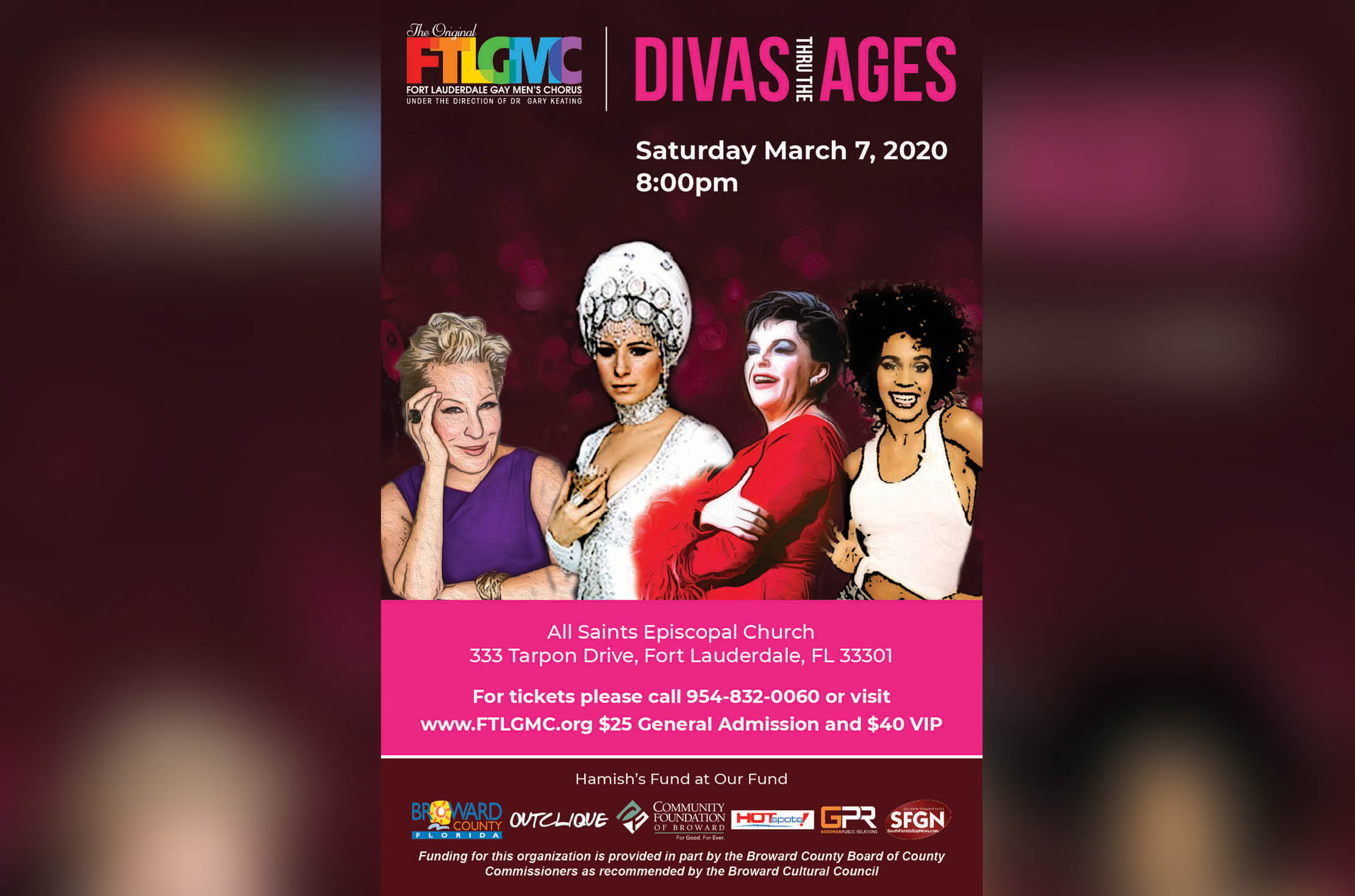 Get ready for a little history, Diva Style!  Icons are coming to life thanks to the Fort Lauderdale Gay Men’s Chorus presentation Divas Through the Ages. A lady never tells her age, but these figures are timeless. Think modern like Lady Gaga and Madonna. Historic like Judy and Liza. Timeless like Bette Midler and Tina Turner.

Under the direction of Dr. Gary Keating, we’re about to be treated to a retrospective of songs we know that were historically performed by the divas we think we know. “Divas Thru the Ages is the concert title,” Gary told me. “Lots of choruses, especially gay choruses, focus on the modern divas, Madonna, Lady Gaga, Barbra Streisand, Cher and Bette etc. I have a real need to share with them that many of the hits from these divas are remakes of classics from earlier divas and that there are some ‘male’ divas as well.”

Male divas? Yep. While not wanting to reveal too much, Gary says we should think in terms of Sir Elton John all the way back to the Chairman of the Board, Mr. Frank Sinatra.

Choosing the music for this show was a lot harder than just checking out a few drag shows on The Drive and seeing which songs and characters got the biggest applause. “Lots of research by me (Gary), our Artistic Committee and members go into the creation.  Barbra made Fanny Brice hits big again, Bette brought back Sophie Tucker. Our audiences are very diverse in age, ethnicity and religious backgrounds as well as gay and straight.”

Dr. Keating says the music selections will be fun and touching, taking the audience through a range of emotions. “There needs to be something for all of them along with a laugh and a tear to make the experience complete, and that means both our audience and the members. It can never be just about one or the other.”

The great selling point about a show that takes the audience “through the ages” is that it will reach everyone. Nostalgia and a history lesson for some, a touch of modern divas for others. Gary believes the key to exposing everyone to as broad a diva experience as possible. “Our Artistic Committee has been instrumental in making our programs unique and relevant to our audiences. We do what I refer to as Choral Theater.” He says that means a “dialogue” has been written to give the show direction, and adds a personal touch to the show. “I remember the first time I heard Sophie Tucker belt out Some of These Days and remembered it when Bette Midler used it in her touring show. It brought back such wonderful memories. These are the kinds of things the men share and it makes the concert very personal. But it takes lots of research, time, and commitment from the whole chorus.”

All the men will be on stage, but he says we should keep a lookout for some fun on the side. “When the lights come up you will always see the entire chorus on stage even if a little schtick is happening, because they all have someone who came to see them and both on and off stage, and that connection needs to happen.”

And Gary left me with a promise, “After that, sit tight!  It will be a great ride!”

The concert goes down Saturday, March 7, 2020, but you don’t have to go somewhere over the rainbow to attend. It’s happening at the All Saints Episcopal Church in Fort Lauderdale. For tickets or more information on this event, or any of the Chorus’s other concerts, check out their website, www.FortLauderdaleGayMensChorus.org

Makeup with a Cause