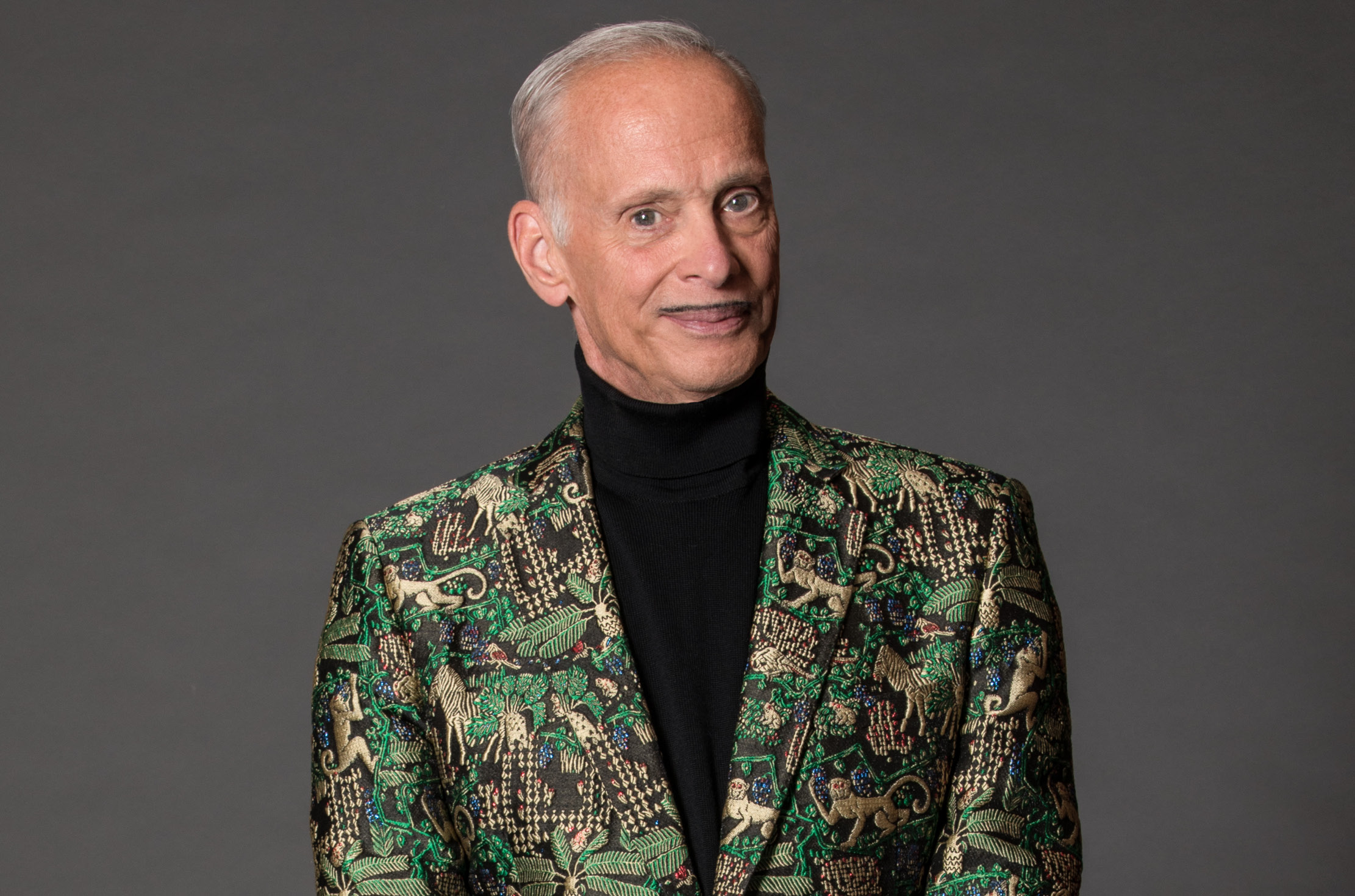 There are almost too many words from which to choose to describe John Waters. Groundbreaking filmmaker, actor, writer, raconteur, and artist are just a few that come to mind. In December every year, Waters is a torchbearer and flag waver of Christmas in the way that only he can do it. His A John Waters Christmas show and tour is the stuff of legends and laughs, and the 2019 edition is sure to be no exception. Additionally, Waters’ recently published book, Mr. Know-It-All (FSG, 2019), an entertaining and informative memoir crossed with a how-to, would also make for an ideal Christmas gift.

I was given the honor of conducting the first interview John Waters did for the 2019 Christmas tour and I hope I lived up to the challenge.

Gregg Shapiro: One of the first things I think of when it comes to you, John Waters, and Christmas, is Dawn Davenport’s Christmas meltdown in 1974 movie Female Trouble. Did you or anyone you know ever have a Christmas morning like that?

John Waters: Actually, I know someone that was arrested Christmas morning and the tree was knocked over when the police came. That happened after I shot the scene. It wasn’t a fan or anything. Many people on the Christmas tour, through the years, have told me similar stories about the tree falling over on their mother. It happens a lot. Usually liquor or the dog is involved.

GS: How much of that scene in Female Trouble would you consider to be an inspiration for your annual A John Waters Christmas show?

JW: I don’t know that it has too much to do with it. I think it has more effect earlier, in the seventies and eighties, when I had my big Christmas party, that I still have. We purposely gave each other gifts that we would hate. We used to throw them out the window which I think was rather irresponsible because I lived on the seventh floor [laughs]. I think it was more a case of, “How dare you give me this present!” I think it inspired that.

GS: Your 2004 album A John Waters Christmas is one of my all-time favorite holiday albums. Do you include any of the songs on the album in your holiday show of the same name?

JW: I think sometimes the theaters play it as people are coming in (from the lobby). The last time I did something publicly with it was when the mayor of Baltimore was Mayor (Martin) O’Malley, who later became the governor. Every year they have the big ceremony where they turn on the Christmas lights in the city. He and I came out to the song “Santa Claus is a Black Man” and we turned on the lights.

GS: 2019 will be the second Christmas with Trump in the White House. Does he come up as a topic in your Christmas show?

JW: He does because we’re always talking about coal. He’s even ruined the word bad. Even bad little boys can’t be proud of being bad anymore. Yes, he does come up in it. It’s pretty impossible not to have some political gifts in mind when you’re talking about Christmas.

GS: Warm and snowless cities such as West Palm Beach, San Diego and Tucson are among the places you’re performing A John Waters Christmas Show. Are you the kind of person who needs to have snow on the ground to get into the Christmas spirit?

JW: No, not at all. I’ve had Christmas in foreign countries. I kind of like extreme weather. My favorite Christmas view used to be in L.A., on a hot day when it’s Christmas, in front of the Scientology Center which has Christmas lights around from the city [laughs]. It was such a bizarre sight and I always liked that.

JW: I’m right in the middle of rewriting the whole show. It’s almost completely different every year. I think it’s a good gift! If you have a first date for A John Waters Christmas, you’re either going to get married or they’re never going to speak to you again. It’s hit or miss. I’ve met many people that have told me that they got married after a first date of seeing one of my movies or being at the Christmas show. Now they come to the John Waters Summer Camp every year. I think it would be a romantic date.

GS: One of my favorite sections of Mr. Know-It-All is “I Got Rhythm,” in which you talk about your favorite music. I’m so glad you wrote about Buchanan and Goodman’s “Flying Saucer” 45 on Luniverse Records. I have a copy that was part of my mother’s record collection. Do you think the days of novelty recordings such as this are a thing of the past or could there be a revival?

JW: That was the first song that samples, really. It was such a huge influence on me because in “Flying Saucer” they told a story using other people’s lyrics without the original meaning. That’s exactly what I have done in the soundtrack to every one of my movies. I use snippets of songs as the narration, to build the story and spin it together better. There hasn’t been a great novelty record that I know of in a while. “Valley Girl” was a great one and there were later ones – “Baby’s Got Back.” But I can’t think of one recently that swept the nation. I challenge anybody, no matter what their musical taste is, to be able to identify correctly and talk about each one of the Top Ten on Billboard’s 200 chart. It’s so splintered! There’s no one genre. It used to be that everybody in the country could sing the Top Ten no matter what decade you’re in. I would say that would be impossible to do today. I think of all the novelty records that I wrote about (in Mr. Know-It-All) were about car accidents. You’d never have that today. All the teen suicide songs! Are you kidding me? That would be the most politically incorrect you could ever do. All the subjects about novelty records were about tragedy in some way.

GS: The closest might be the parody lyrics of “Weird” Al.

JW: Yes, but that was a long time ago. I’m trying to think of a current one. And if there is one, my assistants are in trouble because part of the young ones’ job is to be a youth spy and tell me things.

GS: I describe Mr. Know-It-All to my friends as a memoir crossed with a how to. What was the impetus for writing the book in this fashion?

JW: Because I wanted to share my negotiation skills that I had somehow developed over the last 50 years so that you, too, could fail upwards. You, too, can be messed up and triumph. You, too, can never have to get a real job.

GS: Finally, the music world recently lost one of the greats, Ric Ocasek of The Cars. Ric played a “beatnik cat” in 1988’s Hairspray. Do you have any memories of Ric that you’d like to share?

JW: I remember Ric! He was from Baltimore! He was a beatnik, probably. The first thing I ever wanted to be was a beatnik. We’re the same age. He was lovely. He came for the day. He got along very well with Pia Zadora. He came to the premiere (of Hairspray) in Baltimore, I remember, with (wife) Paulina (Porizkova). I’m not sure I have ever seen him since. I think when we had the big 30-year reunion (in 2018) of Hairspray at the Academy of Arts and Sciences in L.A., I tried to get him to come. He was very favorable about it and said to send his love to everybody, but he didn’t come. I’m not sure if he was ill for a long time or not at the end, but that could have been the reason. I was always a fan. He was a gentleman and a music legend. I’m really privileged that he was in that movie. I think people remember that scene well.

The Program by Ty (January)