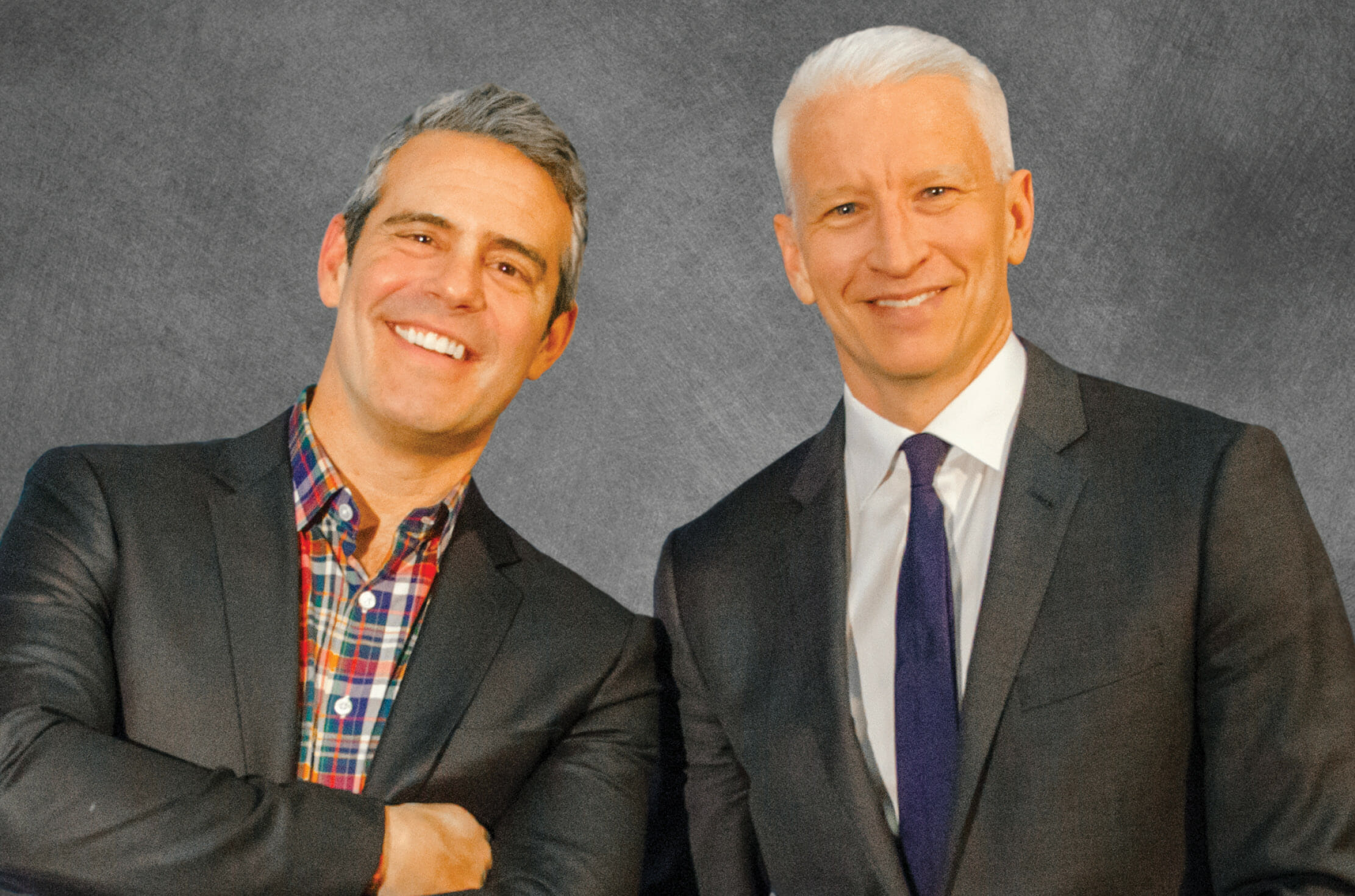 AC2: An Intimate Evening with Anderson Cooper and Andy Cohen is coming to the Broward Center for the Performing Arts on Saturday, November 2, 2019. Showtime is at 8:00PM.

Audiences are invited to join Anderson and Andy for an unscripted, uncensored, and unforgettable night of conversation and laughs. Longtime friends, the late-night talk show host and the journalist interview each other and take questions from the audience. This popular show is a live, interactive look behind the scenes of pop culture and world events.

McKay Calderon, the show’s marketing director, has been with the show since its inception in 2015. She says audiences can expect a fabulous time.

“This show is very fun and lighthearted,” she says. “Basically, we have Andy talking about Watch What Happens Live and The Real Housewives, his interactions with celebrities and stuff going on with his life while Anderson talks about being on CNN and what’s happening in the news and such. They are both up on stage and it’s just an intimate evening with them both. It’s so much fun and audiences are going to have a great time.”

The first AC2 show opened in Boston, followed by Miami Beach, Chicago, and Atlanta. The idea for the show came about after Cooper interviewed Cohen about his then-latest book, “The Andy Cohen Diaries.” Since then, the two-man show has continued to tour, reaching over 50 cities.

“The show has been extremely popular, and they continue to build it up,” Calderon says. “As long as the tour continues to be a great success, they will keep it going.”

When Cooper and Cohen first talked, it was during a phone call to set up a blind date back in the 90s. The date never happened, but a lasting friendship did. Even though they seem like complete opposites, but opposites attract, right?

“The chemistry between Anderson and Andy is just as magical in real life as to what we see on TV,” Calderon says.

Anderson Cooper is the anchor of CNN’s Anderson Cooper 360°, a global newscast that goes beyond the headlines with in-depth reporting and investigations. The show airs weeknights at 8:00PM EST on CNN and is simulcast to an international audience on CNN International.

Since the start of his career in 1992, Cooper has worked in more than 40 countries and has covered nearly all major news events around the world, often reporting from the scene. He has also played a pivotal role in CNN’s political and election coverage and has anchored from conventions and moderated several presidential primary debates and town halls. In 2016, Cooper was selected by the Committee on Presidential Debates to co-moderate one of the three debates between Hillary Clinton and Donald Trump.

In addition to his shows on CNN, Cooper is also a regular correspondent for CBS’s 60 Minutes.

In 2016, Cooper and his mother, heiress and socialite, Gloria Vanderbilt, published a collection of correspondence in a book called “The Rainbow Comes and Goes: A Mother and Son on Life, Love, and Loss.” Cooper always considered himself close to his mother, but his intensely busy career only allowed him to spend little time with her. When she suffered a brief illness at the age of 91, they resolved to change their relationship by beginning a year-long conversation unlike they had ever had before. The book debuted at the top of the New York Times Best Sellers List and remained on the list for three months. Vanderbilt passed away in June of this year at the age of 95.

Cooper’s first book, Dispatches from the Edge: A Memoir of Wars, Disaster, and Survival, was published in 2006 and also topped the New York Times Best Sellers List.

Before joining CNN, Cooper was an ABC News correspondent and host of the network’s reality program, The Mole. He also anchored ABC’s overnight newscast, World News Now, and was a correspondent for World News Tonight, as well as 20/20. Cooper joined ABC from Channel One News where he served as chief international correspondent. Throughout his time with Channel One, he reported and produced stories from conflicts in Bosnia, Cambodia, Haiti, Israel, Myanmar, Russia, Rwanda, Somalia, and South Africa. Channel One News was a school television network seen daily in more than 12,000 classrooms nationwide.

Cooper is a 1989 graduate of Yale University with a Bachelor of Arts degree in political science. He also studied Vietnamese at the University of Hanoi. Cooper currently resides in New York City.

As for Cohen, he is an Emmy Award-winning host, producer, and author best known as the host and executive producer of the Emmy-nominated Watch What Happens Live with Andy Cohen, Bravo TV’s late night, interactive talk show. The series is the only live show in late night television and consistently makes headlines with bold interviews audiences do not see anywhere else. Because of this, Watch What Happens Live with Andy Cohen has become a nightly destination for some of the biggest names in pop culture, including Meryl Streep, Cher, Oprah Winfrey, Jennifer Lawrence, Ryan Reynolds, Mariah Carey, and Lady Gaga. Cohen also serves as the executive producer of The Real Housewives franchise and hosts the network’s highly rated reunion specials.

Born and raised in St. Louis, Cohen is a graduate of Boston University where he received a Bachelor of Science in broadcast journalism. He began his career in television as an intern at CBS News and spent 10 years at the network, eventually serving as senior producer of The Early Show, and a producer for 48 Hours and CBS This Morning.

In July 2000, Cohen joined the pop culture and arts cable channel, Trio, where he ran original programming and development. He was responsible for developing and supervising all of Trio’s original productions, including the critically acclaimed original documentaries Gay Republicans, Easy Riders/Raging Bulls, and Brilliant, But Cancelled. Once Bravo purchased Trio in 2004, Cohen’s success was rising rapidly.

In his ten years as an executive at Bravo, Cohen was responsible for an aggressive slate of unscripted series and specials, including major hits such as Project Runway, Top Chef, Queer Eye for the Straight Guy, The Millionaire Matchmaker, the Million Dollar Listing franchise, Being Bobby Brown, Shahs of Sunset, Flipping Out, Top Design, Work Out, Make Me a Supermodel, Blow Out, Kathy Griffin My Life On the D List, The A List Awards, The Rachel Zoe Project, Work of Art: The Next Great Artist, Bethenny Ever After, Tabatha’s Salon Takeover, and The Real Housewives franchises.

In Fall 2015, Cohen launched “Radio Andy,” a personally curated channel on SiriusXM focused on pop culture, celebrities, lifestyle, relationships, and the dish on all topics deep and shallow. The channel is a fun, uncensored entertainment and talk destination with celebrity hosts including Cohen, who has daily and weekly shows on air.

In addition to radio and television success, Cohen is also known for his best-selling books. His autobiographical memoir, Most Talkative, was released in May 2012 and became a New York Times Best Seller. In 2014, he published his second memoir, The Andy Cohen Diaries: A Deep Look at a Shallow Year, inspired by the similarly titled The Andy Warhol Diaries. The book spans a year long of journal entries beginning in September 2013. In 2016, Cohen launched his own book imprint Andy Cohen Books and in November became a New York Times best selling author for a fourth time with the release of his latest book, Superficial: More Adventures from the Andy Cohen Diaries.

Cohen currently resides in New York City with his baby boy Benjamin and dog Wacha. He is currently on the board of directors for the charity, Friends In Deed, and has made various guest appearances on several talk shows. In January 2017, Fox ordered a revival of the popular matchmaking show, Love Connection, with Cohen as the host. Later that year, Cohen succeeded Kathy Griffin as co-host of CNN’s New Year’s Eve coverage alongside Cooper. Earlier this year, Cohen was awarded the Vito Russo Award by GLAAD for making a significant difference in accelerating LGBTQ acceptance.

Tickets for AC2 are on sale and available at the Broward Center’s AutoNation Box Office, Ticketmaster.com,

An Eye for Design (April)