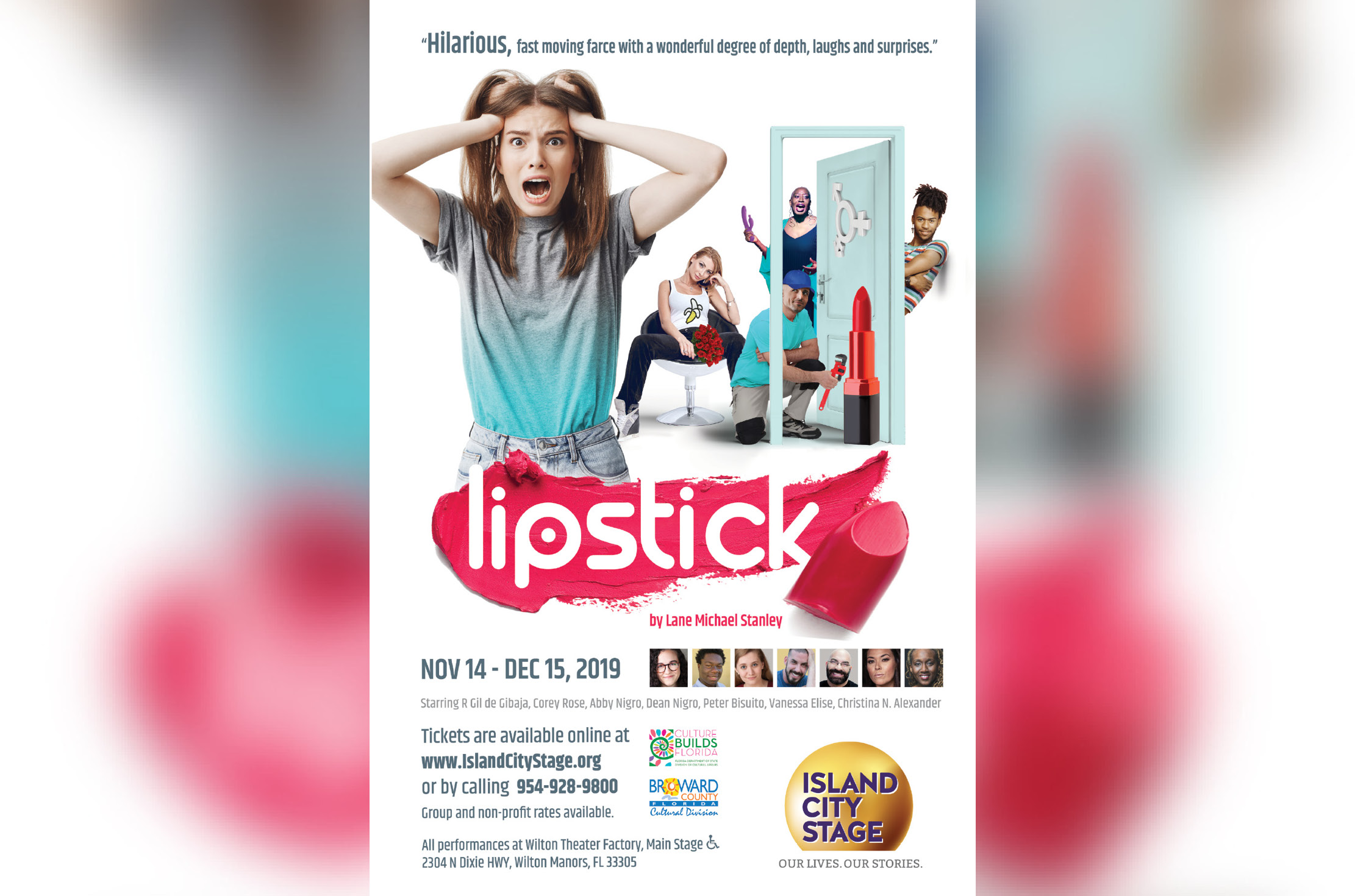 An ex goes from dating women to marrying a man. Someone’s coming over for dinner and you don’t know if it’s a date. A relative from out of town pops in. Everything and everybody is converging on Anna in Lipstick. A new season at Island City Stage opens with an all new production from author Lane Stanley.

He took time to tell OutClique about the comedy with Anna at the center of the storm. “Anna is an out and proud lesbian, and her friend Kelly from yoga is coming over for dinner. Anna can’t tell whether Kelly is gay, so she has no idea whether this is a date, and therefore no idea how to act.” But that may be the least of Anna’s issues. “Between her rambunctious best friend, an ex who shows up in a wedding dress, a no-nonsense landlord, an overzealous visiting family member/tourist, and a slew of men from the dating app Bandit, Anna can’t get a moment’s peace while she tries to navigate her dinner with Kelly.”

Now that’s a dinner party I’d love to attend, and we all can.

A farce comedy featuring the gay community is rare, especially outside of New York City and London. It’s especially rare to find one featuring lesbians, and that’s one of the things that motivated Lane to write Lipstick. “We need more queer comedies in this world, so my first intention was to write one. As beautiful a movie as Brokeback Mountain is, as a queer person with a dead fiancee, it doesn’t give me a lot of hope for my life.” So it was a challenge not only to represent, but also avoid cliché. “I wanted to write something that was a specifically queer experience, without telling a coming out story – and that’s how I arrived at this issue of women coming over to hang out as friends vs. as a date. I think that’s something queer folks experience much more than straight folks. The play is a huge celebration of queerness, of fluidity and bisexuality especially, and of embracing queer culture and stereotypes without being trapped by them.”

It’s not uncommon for playwrights to develop characters from people they know in real life. That’s the case here, but Lane says no one in the audience will see themselves. “My girlfriend at the time definitely knew the play was about her. She had never been in a queer relationship before we started dating, so she was definitely my Kelly. But we’ve long since broken up, so I don’t think she’ll be in the audience!”

Lipstick comes at a time of transition for Lane. He began the project as Alice, and he says this time in his life definitely influences his art. “I’ve been thinking a lot about how presenting more masculine and bearing a masculine name affects the work I’ve done on gender, sexuality, and the patriarchy. Lipstick is a celebration of queer womanhood, and that might make a little more sense to audiences coming from someone named Alice.” And getting to this moment has been more than a decade in the making. “I have tried on just about every type of queerness since coming out as bisexual in 2006 to starting HRT in 2019, and I think that gives me a very specific personal experience, but also a very broad experience of all the different ways someone can be queer.”

With opening night just a couple weeks away, stress and jitters go hand-in-hand. But by the time the big night rolls around, Lane’s got to be ready to let go and trust his team. “As a director and writer, it can be hard to sit in the audience and know you have no power over what’s about to happen. If something goes wrong, you are no longer the person who can fix it – that’s in the hands of the performers, stage manager, and crew. But, that’s also a blessing when you have amazing collaborators!” Once the cast takes its bows and the house lights come up, Lane’s favorite part of the night begins. Definitely talking with audiences afterwards. I love hearing what stood out to people, and especially if no one knows what you look like, you can overhear a lot of honest opinions as folks talk to each other and leave the theater.”

The show opens on Thursday, November 14, 2019 and runs through December 15, 2019. For tickets and more information, go to www.IslandCityStage.org/Lipstick.

The Play That Goes Wrong at the Kravis Center